Momodora Wikia
Register
Don't have an account?
Sign In
Advertisement
in: Momodora: Reverie Under the Moonlight Bosses, Bosses

Pardoner Fennel is a boss in Momodora: Reverie Under the Moonlight. She is the younger sister of Archpriestess Choir. Both she and her sister are fanatical of the cult Esselin.

She can be fought in the Forlorn Monastery after obtaining the Monastery Key from Cotillard. She wears a white dress and has long white hair with a flower hairband in it. Her weapon of choice is a long red sword, which is used for her impressive swordplay. In addition to that, she is very agile, almost seeming like she is able to teleport.

When she is defeated, she will lament saying, "Why ... My Lord ..." then magically disappear. If you beat her without getting hit she will drop Tainted Missive. 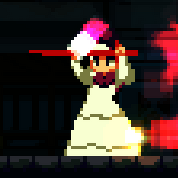 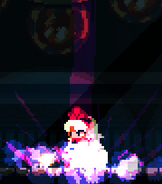 Jumping attack. Causes curse, even if you pass through her after she did the attack.
Community content is available under CC-BY-SA unless otherwise noted.
Advertisement