Oko Jr. & Oglop are recurring enemies in the Momodora series.

Oko Jr. & Oglop is a duo of enemies and can be first encountered in Area 2 of Momodora I.

The two consist of a box with an eye in the middle (Oko Jr.) and four more eyes, that are used like wheels to drive around a block (Oglop). The fact that they are unable to attack by themselves makes them more of a nuisance than an actual enemy.

Upon taking damage, Oko Jr. will disappear, leaving Oglop to spin around the surface its stuck to. The four eyes then can be destroyed with an additional attack.

Oko is an enemy that can be encountered in Momodora II.

Unlike in Momodora I, Oko counts as only one enemy in the second game of the series and not as a team of enemies. The design, however, didn't change: Oko still consists of a box with a large eye and four smaller eye at the sides and still drives around blocks.

The attack plan Oko has didn't change either: Their only way to attack the player is by passing through the character, damaging on contact.

Oko Jr. & Oglop is a duo of enemies and the first enemy encounter in the Ishlith Shrine in Momodora III.

Momodora handles the two in the same way they worked in Momodora I: The two are seperate enemies again consisting of the eye box (Oko Jr.) and the four additional eyes (Oglop). The behavior stayed the same aswell, driving circles around blocks and beingunable to attack by themselves.

When using the charge attack to throw one paper seal, the box in the middle can be destroyed and Oglop will continue to spin around the surface its stuck to. The four eyes then go down with one more attack. 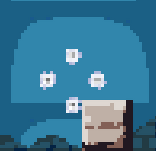 Oglop without his comrade in Momodora III.
Community content is available under CC-BY-SA unless otherwise noted.
Advertisement