The Goddess of Death (also known as Rell) is the final boss in Momodora III.

After entering the room, you wander a little bit to the left and she will appear right behind you. She will talk to the character for a brief moment, before starting the fight.

The boss fight against Rell consists of three phases:

In the first phase, she will vanish after every attack, just to reappear nearby. She uses these three attacks in succession:

After depleting her first life bar, she will regain another one. She will start to hover in place with a giant snowflake behind her and will use there two attacks while in this phase:

Two lifebars down, one to go. This time, Rell is getting serious, swinging a red scythe. Her two attacks this time are:

After emptying this lifebar, she is down. At this point, you can decide to get the bad or good ending:

Can be jumped over with the right timing.

Keep moving and this thing shouldn't hit you.

Shortly after the glow, the energy waves erupt. 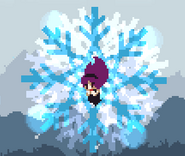 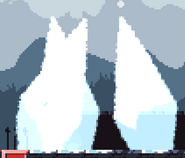 Harder to dodge, but manageable after a few tries.

Keep your distance.
Community content is available under CC-BY-SA unless otherwise noted.
Advertisement