The Flower Nymph is an enemy that appears in the Belltower Garden area in Momodora III.

Flower Nymphs are as annoying as they are cute. They can't be seen from afar, since they wait burrowed into the ground. When you come close enough, they will pop out, which is their first chance to damage you. The flower on their heads also counts as a hurtbox, so you cannot just jump over them to avoid the fight.

If you somehow avoid them after they appeared on screen, they can reburrow themselves and appear out of the ground at your position again, effectively teleporting to you. They can also start singing to spawn heartshaped petals which will eventually travel across the screen. 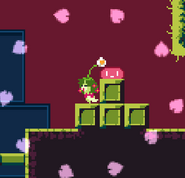 Killing with cuteness.
Community content is available under CC-BY-SA unless otherwise noted.
Advertisement