Bakmen are recurring enemies in the Momodora series. They existed since the first Momodora game. They have a huge eye instead of a face and wear a Scarf-Cape.

Bakman is the first enemy encountered in Momodora I. They throw BAKs (which back then were only Bakmen's and Lamia's projectiles, not standalone enemies) up in a curve. They don't pose much of a challenge since you can take them out from a distance or from up-close.

Bakmen are common enemies found in Momodora II. Statues of them appear in KoHo Plains. Just like in the other games they throw BAKs in a curve and are easily defeated.

There is a variation of Bakmen with a yellow Scarf-Cape. These throw horizontally instead of vertically. The yellow Bakmen, unlike the red ones, don't have a blind spot in a small space in front of them.

Bakmen are among the first enemies you can encounter in Momodora III. They can be found in the Ishlith Shrine and in Artemisia's Grave.

They work similar to Hammer Brothers from Super Mario, since they are throwing projectiles in an arch. However, Bakmen throw bigger projectiles in form of BAKs and they have long pauses between each throw. Bakmen have a dead angle in front of them when throwing, giving the player the opportunity to jump in front of them and land a hit.

Later in the game, you can encounter Bakmen, who throw bombs instead of BAKs. These enemies are highly dangerous as they will kill you on almost every difficulty if they hit. Avoid the explosion at every cost and try to hit these Bakmen with your charge attack to ensure safe passage. 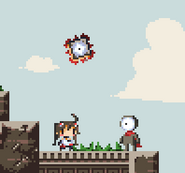 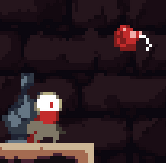